What Are The Advantages of Flutter App Development?

The source code for the e-commerce flutter mobile app is free to use with Google’s UI toolkit. Applications created with flutter make it simple to create hassle-free, specialized mobile commerce applications. Developers can alter and enhance the features based on the demands of the business. The framework has a lot more features, with the following core ones:

Why Do Businesses Prefer Flutter For Their E-Commerce Mobile App?

As a business in today’s times, having an efficient and immersive e-commerce mobile app is an essential need. E-commerce apps bring many benefits; hence, it’s the future of business. We will discuss the advantages of flutter in detail. 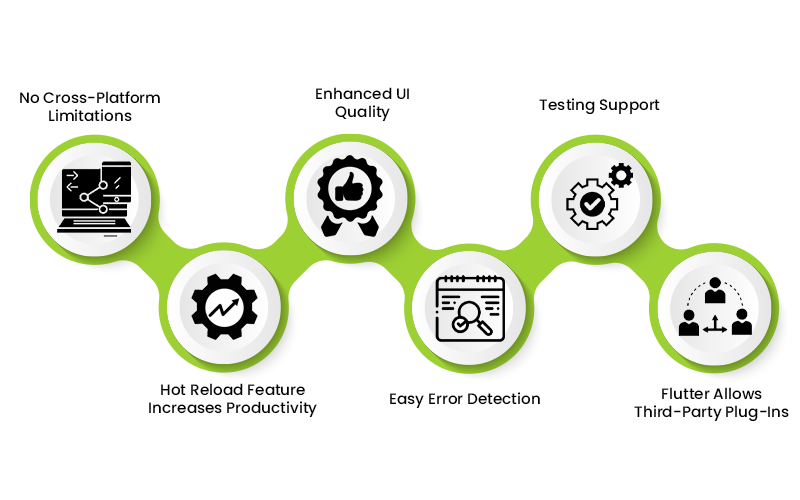 All businesses desire to be present on the two major mobile OS platforms; iOS & Android. To achieve this dual platform presence, developers have to code the same application for two different platforms. It also means that businesses have to invest more time and money in the development of the app for both iOS & Android. But, flutter allows you to create mobile apps that work perfectly on iOS & Android with the same code. This feature saves a lot of time & money for businesses and the hassle of developers recreating the same app for different platforms.

The hot reload capability of the flutter app development is one of its most exciting features. It enables the developer to see the result of any changes in source code in real-time. Developers can view the modification as soon as they change the code and save it. This feature also allows designers and developers to enhance the app user interface easily. This feature alone reduces the time required for app development by a considerable margin of 30% to 40%.

Flutter uses Skia, the same graphics engine popular browsers use, like Mozilla Firefox, Sublime Text 3, and Google Chrome. The UI in question renders a quick and efficient interface. This makes it possible for flutter to create applications with a rich user interface compared to other development frameworks. Using a variety of widgets will help you appealingly design your app. The entire process is pretty simple. To create a wide range of functionalities and give the user a top-notch experience, you must use one widget inside another. On both the Android and iOS operating systems you can achieve this. Furthermore, flutter allows you to stack widgets vertically or horizontally to create a final rectangular visual component with text. You can also stack widgets side by side.

Whenever an error arises, the entire app malfunctions, and it becomes difficult for the developers to detect the exact place of the error to resolve it. But, in the case of flutter apps, it’s easy to see the errors and fix them. When an error occurs in any widget of flutter apps, only that particular widget or its components are harmed. But, the rest of the program is unaffected. Thus, the developer has to read the error message and resolve the issue from the affected part of the app.

The testing support that flutter apps provide is good because the codebase of the e-commerce flutter mobile app is compact. The testing process is made simpler and faster due to automated testing by the continuous integration service. These services serve as a filter to stop bugs from entering the source code when you try to add new code.

Third-party integration is possible with flutter. Adding new elements or features that are not included in the built-in classes is a valuable feature. Developers can include features like augmented reality, machine learning, audio/video, and monetization.

Why Should You Hire a Flutter App Development Agency?

1.Define Your Needs and Allocate a Budget

Knowing what your company and the digital product need is the first step. Determine your goals and ask yourself what kind of development environment you need. Which characteristics should be present in your Flutter application? What results can be expected using this app? This data is necessary to develop a work plan and select the best experts to work with. Their qualifications should match your project assumptions. Also, decide how much your budget allows you to spend on flutter app development. Knowing your budget constraints is crucial before looking for an agency to create your digital product.

The next step is finding the best partner when you know what you want. First, you should ask agencies for e-commerce flutter development with whom you have worked. Because you know how they work, and there is an established trust. Else, you can ask for references for the flutter app development company from your contacts.

3.Inspect the Portfolio and Reviews

Once you have shortlisted some flutter app development companies, you should check the company’s portfolio and reviews. Evaluate technical abilities, project ideas, business areas, and other elements. Verify if the company has experience working on development projects corresponding to your organization’s needs. You can also get a glimpse of the skills you’re looking for from reviews and ratings.

Flutter is a mobile technology that is among the most advanced ones currently accessible. It has some restrictions, just like every innovation. So, is flutter beneficial to your company? Yes, the advantages of the Flutter app undoubtedly outweigh the few drawbacks. Google’s support also makes it a strong contender to rule cross-platform mobile app development. This implies that you can invest in flutter app development agencies.

Flutter has become incredibly popular among developers since its release. It will probably become the newest big thing in app development as Google works diligently to perfect Fuchsia OS at the moment. By investing in a flutter app development company, you can be sure your mobile application will be created more quickly. It will result in costing you less money. Additionally, it will validate your Minimum Viable Product (MVP) idea faster than you anticipate.