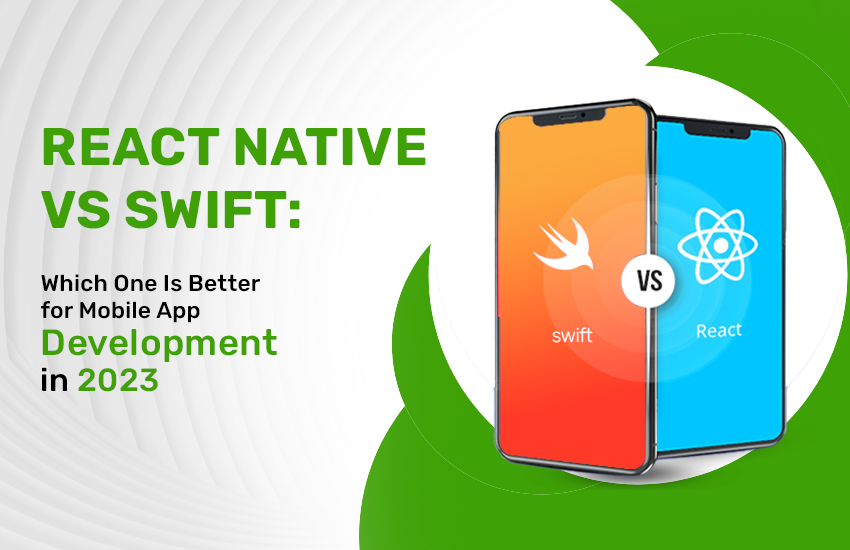 In today’s scenario, mobile apps get crafted into urbane, feature-rich, and exponentially popular, to catch the glances of viewers. Statistics depict that ios users are just 26%, and the rest of the population sticks to android. App development through IT solutions and services possess core features and aesthetic graphics. However, why do businesses choose to develop apps for iPhone users?

Statistics indicate that better salaries and spending more on in-app purchases by iPhone owners cause this predilection. As a result, now we will investigate the building of iOS apps and contrast React Native with Swift.

It is understandable why companies initially choose to construct iOS apps, as profit is among the key focuses of app development. Swift, a programming language that enables the development of native iOS approaches, is widely discussed when technical experts discuss the development of iOS apps.

Let’s figure out React native vs Swift performance to see which one is superior.

How does React Native Work?

Every rookie initially connects React Native and React at first. Nevertheless, you should be aware of the main distinction between React and React Native before learning the language. It would be simple to pick React Native for the apple version if you are open to it.

The purpose of devising the language was to speed up the design of cross-platform mobile applications.

JavaScript, which React-Native uses, is the most practical language in the world, ahead of Swift. JavaScript has a feature that lets developers reuse up to 70% of the code across different platforms. As a result, you’ll be able to shorten the development process a0nd lower the price of cross-platform apps.

With the help of React Native app development services, developers can write code for Android and iOS platforms. Then UI elements get rendered in their native versions. Thus, React Native iOS app uses the same native UI as any native iOS app. That’s the same scenario for the Android version.

How much does it cost to build a React Native app? I’m sure you’re wondering. Well, you can check out our blog to get a good notion. The development costs will undoubtedly be worthwhile for your company’s investment.

Regardless, the finest apps made with React Native:

The Apple team and the open-source crowd created and maintained Swift, a contemporary and executable software platform, to create native iOS applications for all Apple devices. Swift, introduced in 2014, is regarded as a multi-paradigm general-purpose language.

Swift’s main objective is to increase developer interest in iOS development services. Swift enables the construction of iOS apps & a range of iOS-supporting devices. Its source code is highly dynamic since it gives clear and expressive syntax and semantics.

Swift displaces Objective-C, Apple’s preferred programming language. As a result, it has drawn much interest from mobile app development firms. The following coding strategy is practical and almost without flaws as a result. The best approach to creating an iOS app is in that manner.

Several well-known and well-known brand apps have been created with Swift. A list of the best applications for increased comprehension has been put up.

Swift is the best option for developing native iOS apps, while React Native is suited for cross-platform design. That’s the main distinction between the two languages.

Let’s evaluate React Native vs Swift differences to see which is better for developing iOS apps.

Their performance depends on various variables, including GPU speed, CPU utilization, memory usage, and others.

For a native-like interface, developers can quickly generate console variants of features. Using JS libraries, React Native creates user interfaces. React components wrap native code and interact with native APIs with JS and declarative user interfaces. Due to this, it is indeed simple to develop a stunning User-Interface using JavaScript but quite challenging to keep up with changes and advancements in the native environment.

Swift has access to the platform’s capabilities for creating Native applications. Furthermore, when controlling jobs, including cinematography, Swift triumphs over React Native. Swift gives the iOS platform increased reliability as a result.

React Native is the market leader for cross-platform frameworks; however, producing native apps is still the better option. React Native’s main goal is to use internal APIs and frameworks to run apps efficiently. The app could be shaky since the project plan might possess several levels.

Since JavaScript supports React Native, the language has been available for a while. Due to its simple learning curve and the support of numerous tools, it is becoming well-known. Consequently, experts consider React Native far more straightforward to understand than Swift.

Swift programmers can, however, create native iOS apps as usual. Since Swift was created to overcome Objective C’s history, it has streamlined processes and removed their downsides.

Developers find React Native to have the best features in iOS application creation. However, the web development method differs from the app creation procedure here. Therefore, when using React Native, coders feel confined. React Native does, however, provide several comprehensive documents and libraries that could aid developers in learning the language rapidly.

Swift, on the other hand, has a highly modern learning curve. Apple has nevertheless published a formal paper to aid developers in quickly comprehending the language, its tenets, and features. In addition, Swift offers a stunning function known as Swift Playgrounds that makes learning easier for coders with no prior technical knowledge at any stage of their expertise.

Both languages are pretty recent in the business regarding platform maturity. Swift premiered in 2014, while React Native arrived in 2015.

Among iOS frameworks and code, React Native acts as a link. Swift works when it comes to demanding intellectual and aesthetic tasks admirably.

Hiring a React Native designer is comparatively cheap if you intend to construct an ios app.

React Native is cost-effective and does not compromise the quality of the project. Throughout the long haul, it turns into a win scenario for organizations.

React Native: When Should I Use It?

We nowadays have experienced React Native from every perspective. In summary, React Native is a good option for:

Swift: When Should I Use It?

Swift can be used as your main programming language when:

A last distinction that could be made in this conflict between React Native vs Swift is between cross-platform and native development. However, in this case, we have considered the iOS platform.Therefore, both languages can enable you to create iOS applications with incredible functionality. Choose Swift when the app demands native platform characteristics and React Native when you wish to create a cross-platform app.